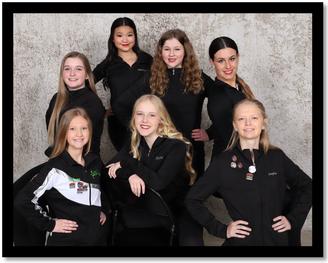 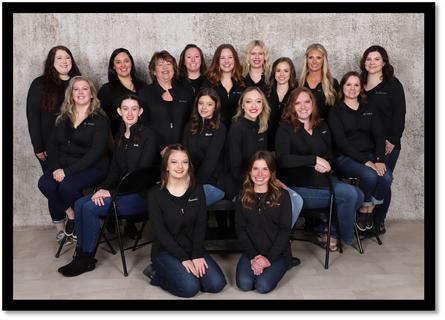 Our staff is unforgeTtable!

Ms. Mackenzie Billington (Owner/Director)- began dancing at the age of three at Dance Ltd. in Decatur, Indiana. She continued dancing with Decatur Dance Academy once ownership switched over in 1999. This is her 29th year dancing. She is trained in numerous techniques such as acrobatics, ballet, cheerleading, clogging, contemporary, jazz, lyrical, Hawaiian, hip hop, modern, musical theater, pointe, and tap. She began assisting at the age of 12 and taught her first class at the age of 17. Whilst she was at Decatur Dance Academy, she attended numerous workshops and conventions. She has trained under numerous well-known professionals in the industry including Sasha Mallory, Marty Dew, Joe Tremaine, and many more! She even appeared on the Dance Moms show in 2014. In addition to dancing, Ms. Mackenzie cheered at South Adams Jr./Sr. High School from 7th-12th grade. She was also voted captain her senior year and later went on to coach the South Adams Jr. High Cheer Squad in 2012. After high school, Ms. Mackenzie went to St. Francis where she received a Bachelor of Science degree in Health & Exercise Science. During her senior internship she interned with Tricia Graf owner of Studio 149 in Fort Wayne, Indiana. Under Ms. Graf, Mackenzie expanded her knowledge of ballet and tap and sharpened her business skills. Ms. Mackenzie again enrolled at the University of St. Francis where she pursued her Master’s in Business Administration. She graduated in August of 2019 with her MBA. While she isn’t at the studio, Ms. Mackenzie stays busy with her family Matt (husband), Atticus (son), Fitzgerald (son), and Beckett (daughter). She also teaches dance and fitness classes at the University of St. Francis. Ms. Mackenzie is excited for the ninth season at Swiss City Dance and can’t believe we’ve been open for nearly a decade!


Miss Anastasia Noll (Staff)- began dancing at the age of three making this her 24th year of dance. She began her dancing career at Jenni's Studio of Dance in Bluffton, Indiana and later switched to Decatur Dance Academy. She assisted at Decatur Dance Academy for many years. She began teaching at the age of 15. Miss Anastasia has attended numerous dance conventions including Tremaine, Step With Me Stuart, and Dance Educators of America. She also attended a workshop with Sasha Mallory from So You Think You Can Dance. Miss Anastasia also competed with the Dance Mom dancers and appeared on their show in 2014. In addition to dance, Miss Anastasia started gymnastics at the age of 8. She later joined a competitive gymnastics team for two years. In the meantime, she also tumbled for five years. Miss Anastasia graduated from Norwell High School in Ossian, Indiana. While she was in high school, she cheered on the varsity cheer squad all four years. Miss Anastasia is currently working in Bluffton as a dental assistant. She is married to her husband, Nico, and they have two kids; little boy named Eli and a little girl named Amelia.


Miss Caley Dull (Staff)- is a local from Berne, Indiana. She has been dancing for 25 years and has taught for the last 9 years. Her first 9 years of dance she danced at Suzy Fuelling's Dance Academy in Decatur, Indiana. She then danced for 6 years at Razz M' Jazz also in Decatur, Indiana. During college, she danced with the IPFW Dancing Dons for 3 year. Miss Caley has taught dancers of all ages and had the privilege to coach the IPFW Dancing Dons while enrolled in college. She is trained in ballet, tap, jazz, hip hop, lyrical, and clogging. For 5 years, she was on a competitive clogging team called Indiana Clogging Express. Her clogging team traveled around the Midwest, as well as the south competing in different clogging competitions. Miss Caley has also received many high point awards from various dance competitions. Miss Caley attended IPFW where she received a bachelor’s degree in Organizational and Leadership Supervision with a focus in Human Resources. Miss Caley currently resides in Berne, IN where she teaches dance at both Swiss City Dance and 5678 School of Dance. In addition to teaching dance, she also works at South Adams Schools.

Ms. Devan Isch (Staff)- started dancing at age three making this her 25th year of dance! She began her dance training in Decatur at Suzy Fuelling’s Dance Academy. Throughout her training she studied jazz, tap, clogging, lyrical, and irish. Clogging quickly became her favorite and she stopped all forms of dance to focus strictly on clogging! Ms. Devan ended up following her clogging teacher Annie when she split from Suzy Fuelling’s Dance Studio to form Ricochet. Ms. Devan trained under Annie at Ricochet in Auburn, Indiana throughout most of her high school career. With Ricochet she attended several national championships. In 2011, Ms. Devan began teaching the clogging program at Decatur Dance Academy in Decatur, Indiana. She continued choreographing when she went to college at Purdue University up until Decatur Dance Academy closed in 2014. At Purdue, she received a bachelor’s degree in veterinary technology. Ms. Devan currently resides in Linn Grove, IN with her husband Eric, son, Owen, dog, Eleanor, and cat, Darla. In addition to teaching at Swiss City Dance she works at a local Veterinary office in Bluffton, IN.


Ms. Hannah Lengerich (Staff)- started dancing at the age of three at Dance LTD in Decatur, IN. Throughout her training she has studied ballet, jazz, tap, clogging, irish, hip hop, musical theatre, pointe, lyrical, and modern. At the age of 12 she began assisting and at age 16 she began teaching at Decatur Dance Academy in Decatur, IN.  Ms. Hannah has a total of 26 years of dance and 17 years of teaching under her belt. Ms. Hannah has trained under several well-known professionals at various conventions and workshops throughouther dance career. After high school, she graduated from the University of Saint Francis in Fort Wayne, Indiana with a Bachelor of Science in Nursing. While at the University of Saint Francis, Ms. Hannah continued her dance education by taking college level courses in jazz and ballet. She currently works as a Registered Nurse in the Emergency Room at Lutheran Hospital in the Night Shift Supervisor role. Ms. Hannah resides in the country of Decatur, IN with her husband Matt and their two kids, Isabelle and Ryker.


Ms. Holly Johnson (Staff)- began cheering under Jay County High School Cheerleading instruction at age ten. She has a total of 23 years’ experience in cheering and tumbling with elementary, middle school, and Jay County High School Cheerleading, as well as Gym City (now known as JC Tumbling), and Swiss City Dance.  As a Jay County cheerleader, she competed in over 20 competitions. She has also competed in stunt, jump, and tumbling competitions, as well as cheered on the sidelines for school sports for a total of 7 years. She has attended several UCA cheer camps and earned the honor of becoming a UCA All Star and a recommendation to become a UCA instructor. She graduated from the University of Saint Francis with a dual degree in Elementary Education/Mild Intervention and taught as an elementary resource teacher for three years. Since being married and having four children she has been the assistant coach for East Jay Middle School for one year and head cheerleading coach at General Shanks Elementary for 3 years.  She has been an instructor at Swiss City Dance for 7 years and currently teaches competitive cheer, creative movements, and tumbling classes.

Ms. Maggie Dresher (Staff)- started dancing at the age of four. She studied dance at Dance LTD, Decatur Dance Academy, Suzy Fuelling’s, and Razz M’ Jazz. Over the years she has studied ballet, jazz, clogging, acro, cheer, lyrical, and hip hop. She started assisting at the age of 14. She competed in various competitions over the years. In addition to dance, she was also a cheerleader from middle school throughout high school. She competed at state level in high school cheerleading. She is a graduate of Bellmont High School and earned her associate degree in general studies at Ivy Tech. She took off several years off of dance for college, starting her career and to start a family. She married her husband Kyle in 2015 and has two children, Deryk and Elise. After enrolling her daughter in dance, she missed her passion and jumped back into dancing and teaching. She has worked at Berne Ready Mix as a bookkeeper since 2014. This is Maggie’s 21st year of dance and Maggie’s 6th year as a dance instructor at Swiss City Dance!


Ms. Mary Craig (Office Manager)- is a lifelong resident of Bluffton, IN and graduated from Bluffton High School. She has been married to Jim for 32 years and is the mother of two children; Ms. Kasey, and former student/assistant at SCD, Miss Haley. She obtained her Paralegal Certification from IPFW in 1998. She was employed by the prosecutor of Wells County for 10 years and assisted in civil law matters, as well as Small Claims collections for numerous businesses throughout Wells County. After the adoption of their children, Ms. Mary started an in-home childcare, which she operated for 7 years, as well as being a certified paraprofessional of Bluffton Harrison School system as a Teaching Assistant in the elementary school. This will be Ms. Mary’s second year working at Swiss City Dance.


Miss Tatum Temple (Staff)- began dancing at The Dance Centre in Wapakoneta, OH at the age of three. She has studied ballet, pointe, tap, jazz, lyrical, and hip-hop. Ballet became her favorite, causing her to go to Upstage Downtown Dance Theatre in Celina, OH when she was in middle school to concentrate in ballet, but continued taking other dance classes at her home studio. During the summer of her senior year of high school, Ms. Tatum studied at the Fort Wayne Ballet, where she studied under Ms. Karen Gibbons-Brown, Mr. Jeremy Blanton, Ms. Eleonora Pokhitonova, and Ms. Jane Lanier. She continued to take classes from the Fort Wayne Ballet throughout her Senior year and performed in The Nutcracker. Ms. Tatum attended the University of Saint Francis, Fort Wayne where she studied dance for the first two years and completed a degree in Liberal Studies. While studying dance, Miss Tatum was able to learn from many notable choreographers and also studied for a week in NYC with the Rockettes.  Currently, Ms. Tatum is working on getting a Middle School Teaching License through Wright State University. This will be her third-year teaching/assisting at Swiss City Dance.